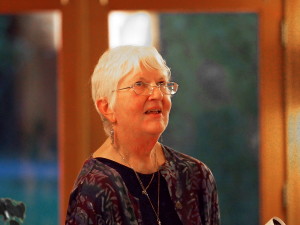 READING AT THE BOOK LAUNCH – Photo by Johnny Palka

Throughout the evening there was a Knowing that THIS was a high point in my life. “Take it in,” the Knowing said. “Revel in it. Give this reading your very best attention and care. Oh, and don’t forget to ENJOY as well.”

The event was the Book Launch Party celebrating the previous week’s publication of my book, Meeting in the Margins. Folding chairs had been brought in and all the furniture had been rearranged in the dining room and the living room of Enso House, the end-of-life residence where I have volunteered as a caregiver over the years. The lights in all the rooms glowed; the friend-baked cookies were mounded on plates in the Garden Room, next to the tea and coffee and handmade cups; nearly 60 friends and neighbors were gathering, and some guests I hadn’t met yet; MoonRaker Bookstore was set up with piles of the newly-minted book for sale. Special-bought pens were waiting for me to inscribe books.

And then it was time to begin. I went to that place inside myself from which the best of my writing comes, that place where the essence of the people of the Margins meets the essence of me and tutors me. And from that place I read and spoke and for a few minutes I gave voice to our society’s invisible people, and they received the love and the affirmation of the assembled listeners. And it was very, very good.

It was, as the inner voice assured me – that Knowing voice of the wise people of the Margins – a singularly high point in my life.

[Meeting in the Margins: An Invitation to Encounter Society’s Invisible People is available at your local bookstore, and from Amazon.com] 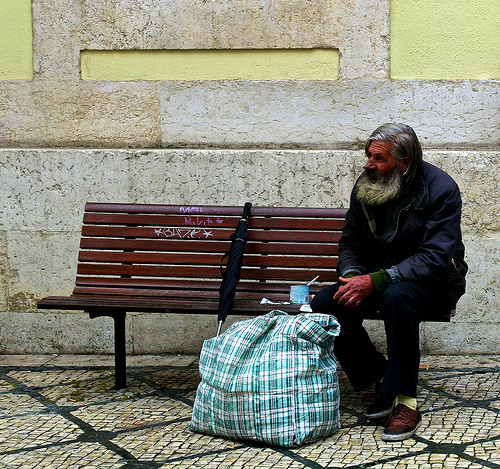 ON CHRISTMAS DAY I scanned an email entitled “Repaying a Homeless Man’s Kindness,” reprinted from Huffington Post and sent by Daily Good: News That Inspires (http://www.dailygood.org/).

This is a topic dear to my heart: the gifts offered by society’s invisible people. At first I simply nodded an acknowledgement to my computer screen and went on to open other emails. Yet, rather than having made my heart smile, as was intended, this article instead made my heart feel heavy. I didn’t have time to think about it that night, and I deleted the article.

But then a few days later a friend on the other side of the country sent me the same article, asking, “What do you think about this?” And I reread the story thoroughly:

A young college woman named Dominique had just parted from her friends after a student night out, when she realized her cellphone was dead. She had lost her bank card and had no money for a taxi home. A homeless man, Robbie, approached her, learned of her dilemma, and offered her all the money he had: $4.60. In the end, she found another way home. But she couldn’t forget Robbie and his kindness.

But then it became a complicated story. It grew out of proportion, and despite good intentions it grew into gestures that, I believe, were far from the meaning and the heart(s) of the matter.

Dominique searched for and eventually found Robbie again. That gesture would have been enough to show her gratitude, to demonstrate their mutual human kindness. If she returned regularly, sat and talked with him, shared personal stories, established a friendship with him – if he wanted it – that would have been a lovely bonus.

But then she enlisted others in a monetary “campaign,” asking students on campus to donate $4.60 apiece to “help change Robbie’s life.” That was a great marketing idea, but an unfortunate one. It’s a gesture that carries the message that Robbie is not enough as he is, and that others know how to “fix” what is lacking in him. It negated his generosity.

Intentionally “paying it forward” to others, in gratitude for Robbie, in honor of Robbie’s intention, would have been an appropriate gesture, but not “paying it back” in amounts that tipped the scales so far that Robbie could never hope to reciprocate, would forever feel indebted.

Then Dominique spent a night on the streets, to “understand the difficulties” of homeless people. I believe this gesture, made by one who can as easily leave the margins as enter them, is an insult to homeless people who do not have that luxury.

And then the once-simple story became even more complicated.

With more than $50,000 raised from the financial campaign, Dominique plans to secure a home for Robbie. But does he want that? Did he ever ask for anything more than the dignity of helping a lost, scared young woman?

Did contributors to this campaign believe that handing over $4.60 was enough to absolve them of any further responsibility for connecting with marginalized people? Or, on the other hand, did story of this campaign subtly say to readers that no simple gesture, no small human exchange can possibly be enough? If it can’t be a BIG gesture, will they choose not do anything at all?

Robbie’s offer was made with his heart, and all the money he had. When Dominique told this simple story it ultimately moved 4800 people to think for moment about something we seldom acknowledge: the possibility that a person who has “nothing” nevertheless has “enough” to offer to another.

It’s a pity that Dominique didn’t have enough faith in Robbie’s generosity. It’s a shame she didn’t believe that her own gratitude was enough. It’s too bad she couldn’t trust that an invisible momentum of grace was already making itself felt, was changing the world in minute ways, without any marketing campaign on its behalf.