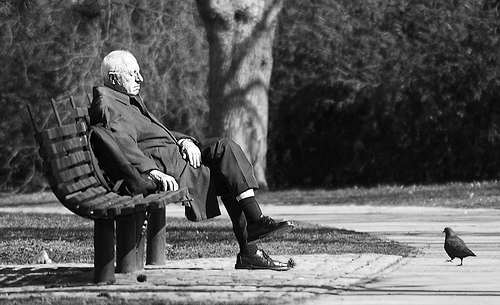 “Just-be-with” is a hard sell in our society. We prefer Nike’s “Just Do It.” We’d far rather DO something, anything, than feel helpless in the presence of another’s dysfunction, discomfort, or pain.

But scientific research is making a new case for being-with.

It also makes the case for the corollary  that an astute homeless woman said to me in a downtown San Francisco park: “It’s reciprocal, isn’t it.” Whatever positive emotions and human connection she had experienced as we were together, were returned to me through her eyes, and through her calloused hand touching my arm.

Psychologist Barbara Frederickson (interviewed by Angela Winter in the July 2014 issue of The Sun) says, “When we are really attuned to another person, we take part in this almost imperceptible dance. . . . this can bring a powerful sense of oneness,” what Frederickson has coined as “positivity resonance.” Like the vibrating of cello strings that are attuned to and amplify each other, this resonance is greater than its individual parts.

Frederickson’s research shows that whether we are sharing an intimate conversation with a friend or making brief eye contact and sharing a smile with a stranger, positivity resonance can improve the health of both people.

But the tricky part is, this sharing has to be done in person. Or at the very least in real time. Texting doesn’t create positivity resonance, but phone conversations do. Just being around a group of others isn’t enough, but connecting with someone in that group is. Most effective of all is making eye contact, and briefly and appropriately touching. In the few seconds at a stoplight, when you roll down the car window and give a dollar to a street beggar and grasp his hand briefly as the dollar is exchanged, a positivity resonance is created between you. Or, at that same stoplight, if you turn to the driver of the car next to you and offer a smile that is returned, the resonance happens.

So what can we do about the problems of our social margins?

By definition, social margins are where people are divided off from the rest of society, deprived of affirmation, kindness, unconditional being-with. But what if once a month each of us went to a hospital, or a hospice, or a homeless shelter, or any of the multitude of places where marginalized people are gathered at the edges of our society (or even to the house next door where that old woman lives alone)?

What if we went with empty hands, intending to give nothing but attention and a gentle touch, with no plan except to be-with; to offer – and allow – a “positivity resonance” to happen?

What if we believed – or at least hoped – that this is enough, and that by this simple act we, and those with whom we connect, will have helped to erase a few inches of a margin that divides us from each other?

For decades I have known, and the homeless woman in the park knew, and now, it seems, science is learning: BEING-WITH IS HEALING.

When we feel empty, being-with can replenish us.

When we feel as if we have nothing, being-with is the gift we can give.

When we feel helpless, being-with is enough.

Frederickson, a scientist, is even bold enough to name this being-with, this positivity resonance, “love.”