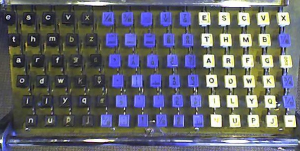 What on earth does THAT word mean?

It’s not an acronym. It is sort of a neologism, though it’s hardly new, and has already pretty much disappeared from our language, leaving barely a whisper behind.

Shrdlu is the second half (my favorite half) of the nonsense phrase etaoin shrdlu which comprises the order of frequency of the twelve most commonly used letters in the English language.

If it looks vaguely familiar to you, then perhaps you’ve had a nodding acquaintance with pre-computer journalism.

The relationship of etaoin shrdlu to publishing is that that sequence is found, twice, in vertical rows on a Linotype machine’s keyboard; Linotype machines are how most type was set for newspapers, books, and broadsheets from 1884 through the early 1980s.

In my mind there’s a unique sound memory that goes with shrdlu – not in pronouncing it, but in how it was produced – the rapid clinking sound of the Linotype keyboard at work. And I remember the deeper metallic clanking sound of a complex Linotype machine creating a slug of lead type for a column of news for the Gary (IN) Post-Tribune, where my father was the City Editor.

Dad got his college degree in journalism in 1931, and began his reporting career at the Indianapolis Star. Before long, however, with a growing family to feed and house, he left journalism for more lucrative jobs in public relations. But printer’s ink was always in his blood, and for the last two decades of his career he returned to journalism.

One on my fondest memories of my father is the Saturday night, sometime in the late 1950’s, when he took me with him to see how the Sunday morning edition “happens.” That’s when I met the Linotype machine, and learned shrdlu.

Dad’s City Editor desk was at one end of the very intense, very noisy, cavernous room where AP and UPI wire service machines spewed out stories from around the world; where stories became slugs of lead type and proofreaders caught errors in all that mirror-image verbiage; where individual letters became handset headlines, and galleys of finished pages were sent off to the press room. I was thrilled with all the activity; I could practically SEE important words ecstatically flying around in the ink-, machine oil-, and hot lead-scented atmosphere.

Just before press time Dad gave me an “assignment” for the Sunday morning paper! He pulled a snippet of a story off one of the wire service printers. It was meant to be a “filler” story – to take up empty space on a nearly-finished newspaper page. This story was about a dispute between neighboring friends and a pet dog. Dad told me to write a quick headline for the story. Well, I took this assignment very seriously. I sat down at a desk, read the twenty- or thirty-word story several times over, then pondered what would be the perfect headline – maybe not Pulitzer quality, but close.

I decided that alliteration would catch the reader’s eye. I debated between “pet” and “dog” for the headline, then chose “pal” for “friend,” so had to use “pet.” Now, how to get some action, some emotion into the story’s headline? Something that begins with another “P.” I was caught up in the heady world of journalism, blissfully unaware when my Dad began pacing behind me. All but “my” page had already been sent to the press room, and the boss’s daughter was holding up production.

Okay, I had Pet and Pal; now how to connect them into a headline for this story? Finally I had it: “Peevish Pal Pokes Pet.” Dad grabbed the notebook page from me before I could change my mind, practically ran with it to the Linotype operator, who set the line. The lead slug was handed off to the pressman hovering over the final galley. The page was now complete, and was trundled off to the press room. Finally finished for the night, the Linotype operator smiled at me, and before he shut off the machine he ran his index finger down the second row of the right side of his keyboard. Then he activated the Linotype, and handed me a line of type that read SHRDLU. I felt as if I’d just been blessed by Clio or Calliope or some other Muse of writing.

And there was one more wonder yet to come that evening. Dad and I walked to the small balcony overlooking the huge presses two floors below us. The pressroom foreman was watching the balcony, and he and Dad exchanged hand signals. Dad nodded and shouted down, “Okay, boys, let’s put it to bed.” The foreman hit a large button that set off a klaxon and a couple of flashing red lights, and slowly the presses began to roll. Tons of off-white paper revolved and stretched and traveled over curved inked embossed plates. I could hardly breathe! Miles of newsprint spun and danced, met and parted, were sliced and folded, and somehow, miraculously, became the Sunday morning edition of the Post-Tribune that was even now being loaded onto delivery trucks.

Dad yawned and said it was time to go home. We got our coats from the chair behind his desk. A pressman, who’d run up two flights of stairs, handed him a copy literally “hot off the press.” Dad didn’t bother to look at it, yet. He knew every inch of what was printed there. Even the little filler story with the alliterative headline on page 32. I was so proud of my father I could barely contain myself and nearly cried. But I didn’t, because I was the daughter of a JOURNALIST. I was now a bit of a journalist myself. So I clutched the talisman in my pocket – a rectangular piece of metal on which was written the magic word:SHRDLU – and went home with my Dad, the journalist who had just made the Sunday edition “happen.“

PS – There is a poignant, well-done 30-minute online documentary, produced in 1978 by the New York Times, about the demise of the venerable Linotype. It’s called “Farewell, ETAOIN SHRDLU” and can be seen at https://vimeo.com/127605643

There is also a 3-minute piece from The Atlantic at https://www.theatlantic.com/technology/archive/2011/05/celebrating-linotype-125-years-since-its-debut/238968/