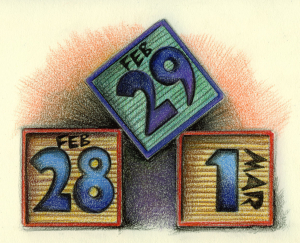 On February 29, 2020, a Washington citizen became the first in the United States to die of Covid-19.

Twenty-twenty was a “leap year.” Twenty-twenty-one is not, yet it has “leaped” over that important date.

There is no February 29 this year to mark the ominous anniversary of what would stretch into twelve months of masking, sanitizing, seclusion. It was a year of Zooming, fear, political unrest. It was a year of sickness and death. We all experienced some measure of social division, depression, and occasional outbreaks of dark humor. I spent an inordinate amount of time reading perpetual newsfeeds, as well as doing jigsaw puzzles, and napping, and consuming videos with my chosen “Pandemic Pod.” Surviving, but not thriving.

There is no February 29 this year. No one-year anniversary date on the calendar.

As I begin to write this essay, it is March 1, 2021. More than 500,000 Americans have died of Covid-19, 5000 of them in Washington. This morning a friend mused about the past year, wondering out loud whether she had “used this time well.” It was a “year-to-live” kind of question, the sort Stephen Levine asked in his book of that title. If this were your last year of life, how should you live it?

But how does one know, either that it IS a final year, OR that one has lived it well . . . or not?

Have I used this time well? Not as fully as I might have, had I had access to a functioning crystal ball on February 29, 2020.

Every day, every moment, of this past year has been lived on the exhausting, awesome, awful cusp of history in the making, of a year without precedent politically, socially, epidemically.

It has been breath-taking, breathlessly amazing, and suffocating, all at once – much like the novel coronavirus to which, gratefully, I did not succumb.

In those circumstances, I guess I’ve done the best I could.

Today is March 1, 2021. It sits on top of an invisible anniversary on the calendar. This afternoon I got my first covid vaccination at a local pharmacy. I felt buoyant, almost giddy as I drove home.

As if I’d just been given a new lease on my life.

As if this is the start-point of a whole new year of my life.

Will I use it well? 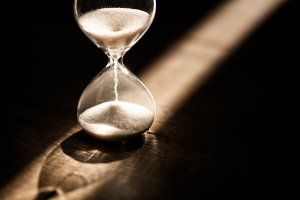 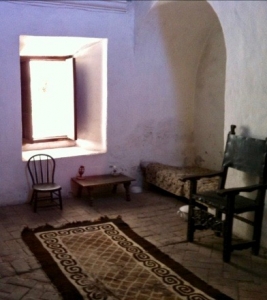 The coronavirus pandemic has sent journalists, medical personnel, and politicians scrambling to their thesauruses (thesauri?) for synonyms often found in monastic lexicons. We’ve been advised to remain “sequestered,” “isolated,” “withdrawn,” “secluded,” “disengaged,” and even “cloistered.”

It’s the phrase “locked down” that reminds me of the monastics of the Middle Ages who were called anchorites. An anchorite was an extreme monastic who took vows to remain permanently in place in tiny quarters, often just a dozen feet square, usually built onto a church. Typically there were three windows in the space: one small shuttered window was cut into the wall shared with the church sanctuary. This was used for viewing the altar, hearing Mass and receiving the Eucharist. Through this window also, an anchorite might provide spiritual counsel to visitors. A second window allowed assistants to attend to the anchorite’s physical needs. And the third window, facing the outside but covered with translucent fabric, allowed daylight into the cell.

Some anchorites were actually sealed into their designated cell with a ritual similar to funeral rites, to signify their “death” to the outside world and their focus trained only on their devotion to God and the development of their soul.

Dame Julian of Norwich was a 14th century English anchorite. At the time, the citizens of Norwich were afflicted by poverty, famine, and the devastating Bubonic Plague. She was a spiritual counselor to people in great suffering. Yet, her writings are suffused with hope and trust in ultimate goodness.

In her book, Revelations of Divine Love, Julian records a series of revelations (“the showings”) she received during a critical illness in May 1373. This book is the earliest extant book written by a woman in the English language. Despite her self-isolation seven centuries ago, she is honored today as a mystic, an unconventional theologian, and a compassionate prophet for our times.

Hildegard of Bingen was an 11th century German monastic. She became an anchorite at the age of eight. She penned hundreds of letters in her lifetime. She wrote volumes on mystical theology, natural history, music theory, medicine and healing, and literature. At the age of 36 she was released from her anchorhold to become leader of the religious sisters of her Benedictine monastery. She went on found several other monasteries as well. She frequently crossed political swords with the hierarchy of the Church (and usually got her way).

In our present age our stay home/stay safe mandates are not as stringent as being walled up in a tiny cell, though for some of us they may have seemed so. Yet, along with those of us who have recovered from or are still safe from the virus, I will long remember what has been emerging from our confinement – art, music, creative cuisine, supportive essays, poetry, face mask patterns, do-it-yourself hand sanitizer recipes. We’ve mastered (or bumbled through) Zoom sessions, connected with friends, family, congregations, even choirs and orchestras; we’ve altered our teaching styles, our learning disciplines; we’ve taken workshops and boned up on that hobby we always wanted to perfect – or to start.

When our lock-down is ended, and the danger of Covid-19 infection has abated, I will not have accomplished anywhere near what Hildegard and Julian did. But these are four ways I will have used my personal “anchorite time”:

1) I’ve tried to practice daily the spiritual exercise of tonglen, especially since I can’t seem to resist reading the dreadful digital headlines as infection counts and body counts rise, and many of our elected leaders seem immobilized. A few years ago I wrote, “The variation of tonglen that I use is basically simple breathing. It begins with being aware of what is before me, particularly whatever is dark, uncomfortable, painful, helpless, marginalized . . . I focus, then, on my willingness to be made useful and my prayer to be kept safe as I “breathe in” these sinister things. For the brief time between the in-breath and the out-breath, I imagine that whatever is negative and dark and hidden will be transformed within me, and then I exhale whatever is positive and light, for the benefit of all beings . . . Sometimes I don’t even set an intention with each breath; I simply ask at the beginning of the day, or at the start of a difficult part of a day, that my breathing be used in this transformative way. Then I just breathe through the day, trusting that my having asked, and being willing to participate, will be enough. And I offer a single heartfelt sigh of gratitude at the end of the day for all that has been transformed by the simple act of tonglen breathing. ” (Meeting in the Margins: An Invitation to Encounter Society’s Invisible People, pp. 142, 143)

2) I have made a point of saying “I love you” to others, as often as it is true.

3) As if I were in an anchorhold, I have paid attention to the smallest of pleasures, like the joy of a Christmas cactus, my companion beside the chair where I write; it is blooming for the first time in four years. Maybe it just needed more noticing.

4) In seclusion it’s a little easier to focus on that most difficult of questions: What do you MOST want of this lifetime?  And I keep coming back to this answer: I want to listen, and to notice; I want to try to capture the heart of people’s stories, and the noticing of lovely things, in words worthy of their beauty. In poems and essays I want capture profound human stories. I want to look at the world around me and proclaim, “Hey, my friend, look at THAT!”

Since that is what I most want in this life, I’m happy to announce that I have four poems being published in literary journals in June:

“Argot of a Feral Life” (a prose poem) and

“Filling in the Gaps”

and Snapdragon: A Journal of Art and Healing (online) is reprinting

Plus, there is a brief piece of mine printed in the “Readers Write” section of the June edition of The Sun Magazine.

In the midst of a worldwide pandemic, from seclusion in my little “anchorhold” on Whidbey Island to yours, wherever you may be, I send you blessings for health, patience, a strong circle of supportive friends, and lots of creativity. 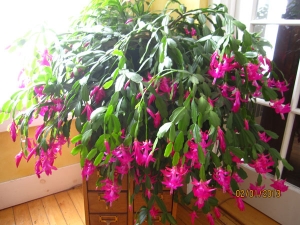