Once upon a time there was a little girl who was afraid of almost everything: bugs that flew, caterpillars that crawled, lightning that flashed, winds that blew, dogs that barked, rumors of robbers, sirens that screamed in the night, vegetables that looked unfamiliar, people that spoke with difficult accents.

In tears she often ran to a wise man, asking him to protect her, sobbing out her question: how could she feel safe when everything seemed so frightening? This wise man was her father; he would hold her until her tears dried, he’d say some soothing words, then send her back out to play. He could not protect her from every scary thing, but he could console her until she was old enough to hear the answer she sought to her question: How could she feel safe?

When the little girl was ten or so, the wise man decided it was time for her to be told the secret to not being afraid. “This,” he said, “is my family’s secret. Your grandfather knew it, your grandmother knows it. Your aunt knows it. I know it. It is a secret that is shared with those who are wise enough to use it. So now I pass this secret on to you: Every day, you must do one thing that scares you. It doesn’t have to be a great big thing. It can be just little tiny scary thing. At the end of the day you may tell me what scary thing you have done, or you can keep it as a secret for yourself. But do it – one scary thing each day.”

For ten years the girl practiced the wisdom of her father: almost every day she did something scary. Because she was facing them, paying attention to the scary things, somehow they didn’t seem quite so fearsome any more. Sometimes she wasn’t sure they even counted as her daily “one scary thing.” So she moved on to bigger scary things – she accepted leadership responsibilities; she auditioned for (and won) the position of drum major in her high school marching band; she sang on the stage; she traveled across the country by herself; she ended a toxic friendship; she moved away from home to live on a college campus.

Now this twenty-year-old young woman finds herself in a world that has become very much scarier than anyone can remember: a global pandemic growing to monstrous proportions; people killing each other over whether or not they will wear protective masks; racial tensions breaking loose in city streets, with political civility and maybe even democracy seeming to be things of the past. She lives in the midst of climate change, with hourly extinctions of flora and fauna. She has what seems to me (her grandmother) to be a bleak future.

But Jessica has perfected the rhythm of one-scary-thing-a-day. And so, in spite of what the future may hold, she moves forward with plans for how her life will serve others. She will be an elementary school teacher. She’ll finish her education degree in another year. She has plans for graduate study. She has learned to discern what’s worth the energy spent on fear (not much, in her experience) and what isn’t. She knows how she will help her young students face scary times.

Once upon a recent time – last week, in fact – this same young woman, who once was afraid of almost everything, did yet another scary thing: she walked into a tattoo shop to have her own wisdom inked permanently into her skin, just above her right inner elbow.

In Jessica’s wisdom, and the determination of so many others in her generation, I find courage for myself, and a glimmer of hope for our future. 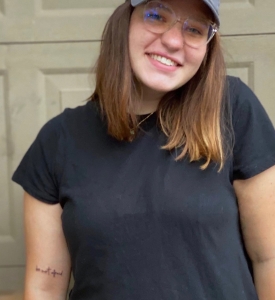