Warning: Creating default object from empty value in /home/customer/www/cynthiatrenshaw.com/public_html/wp-content/themes/enfold/config-templatebuilder/avia-shortcodes/slideshow_layerslider/slideshow_layerslider.php on line 28
 Meeting in the Margins – A Book Having Its Way with Me – Cynthia Trenshaw

All I wanted to do was tell the stories, the best of the stories from my twenty years of work in the margins of our culture.

I wanted to tell the funny stories and the sad ones and the amazing ones, and let the readers draw their own conclusions as to which was which. I believed that readers could derive their own wisdom from a well-told tale. 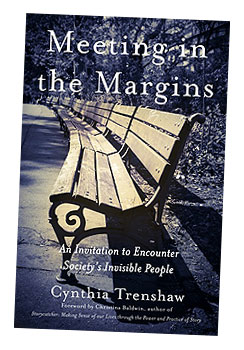 And that is true.

But the book-that-was-yet-to-be demanded more than a collection of vignettes. In its several iterations over the years, Meeting in the Margins has directed me with a variety of voices, not all of them welcome.

The first voice was Christina Baldwin’s, who told me at a writing workshop: “The good news is that your writing is powerful; the bad news is that you have two books in this manuscript, and you’ll need to tease them apart.” (Christina has, years later, graciously written the foreword to Meeting in the Margins.)

Next was a friend who read some of the portraits and said they were “too hard.” He felt uncomfortable reading in such detail about being close to people who, our culture says, are supposed to remain invisible.

And finally, most subtle yet most insistent of all, the marginalized people themselves, or at least my memories of them, said, “Not good enough – go deeper. What’s the real heart of this story? Bring me to life in your words, and bring with me all that I have to offer your reader.”

And when I finally obeyed THAT voice, I was allowed to complete my manuscript.

Meeting in the Margins will be published in October of 2015. Look for it at your favorite bookstore, or online, or here at this website.

Confessions of a Professional Labyrinth-Walker
Scroll to top